Rutgers College and the American Revolution

With the first letter

written to John Bogart, John Stagg, in response to an earlier query, explains his knowledge of the Tory Plot

to murder George Washington and his officers and give New York to the British. At the time, Mayor David Matthews, confessed to having received money from Governor Tyron to hire men to execute the plot.

During this time, several areas of New Jersey were still sympathetic to the British. Many newspapers in New Jersey had a Tory slant so information may not have been clearly disseminated. Thus to get a better understanding of the news at the time, people relied heavily on what they could hear word of mouth.

The letters provided information on the "mustering

" up for the militia from around the surrounding counties. The fourth letter of the collection, indicates that John's friend Simeon DeWitt and his father are to be part of this mustering. Each letter provides details to friendships that existed. They provide a testimony to the history of the time.

War is known to have other effects beyond pulling young men away from families where they were needed. Washington had ordered that lands near the English occupied areas be stripped of produce and other food stock, so as to starve out the British. Unfortunately, those people who were under the occupation of the British and residents of near-by lands also suffered as a result. 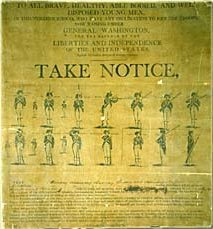 Some people believed that the British would offer favors for turning in rebels. Neighbors were turning in neighbors

. Tories raided rebels and rebels raided Tories. As General Howe invaded New Jersey, he offered protection papers to those that would re-pledge allegiance to the King. These papers were supposed to insure the safety of the person's family and property from the the British troops. Unfortunately, the British and Hessian troops ignored the papers, looting Torie and rebel alike.

When a traitor such as Benedict Arnold was brought to justice the Patriots celebrated. News of his devilry spread throughout the country and citizens reacted in different ways. In Philadelphia, Arnold's effigy was paraded and burned